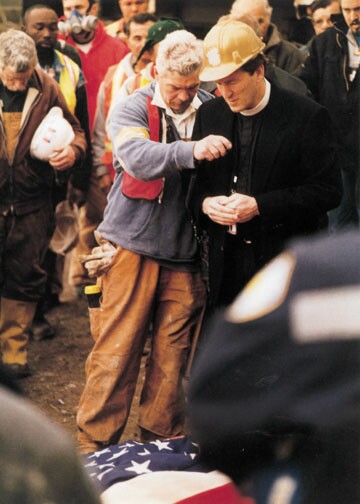 My journey to forgiveness began while standing at the foot of the South Tower of the former World Trade Center as it exploded into an apocalyptic fireball on September 11, 2001. When the first plane attacked the north tower, we assumed it was an accident. How could it be otherwise? Running from my office to try and help out, I was overcome by an enormous wave of suffering and frightened people, covered with ashes and blood, making their escape running south away from the fiery furnace. In that moment – a moment that seemed to me outside of time – I felt a peace come over me, a peace that “passeth all understanding.” In that moment I sensed that, regardless of what happened, all would be well. In that moment I discovered, in a palpable way, that Life and Death are both held within the greater and eternal embrace of Love which, as Victor Frankl put it so eloquently, is the omnipotent power of the universe. This epiphany of Love didn’t protect me from the challenges that were to come, but it was the life force that has sustained me.

At the time I was the priest in charge of Saint Paul’s Chapel, the “little” church directly across the street from the WTC site. Saint Paul’s Chapel had been spared – not even a broken window!
​
It was clear to me that Saint Paul’s Chapel had been spared – not because we were holier than anyone who died across the street – but because we had a big job to do. So for the next eight and a half months we established a ministry of respite and encouragement to the first responders and rescue workers laboring in that Hell of smoke and twisted gnarly steel beams to search for any survivors, and ultimately to find the remains of the dead. Miraculously, through the kindness and generosity of people from all over the world, we were able to serve over half a million meals to police officers, fire fighters and other construction and rescue workers. Our volunteer force grew to over 15,000. We also offered grief counseling services, massage therapy, chiropractic care, podiatry and music, as well as bedding for workers to sleep on any given night. The story of this ministry is extraordinary, and it is my sincere hope that my book describing these events, and sharing the stories of this incredible time, will find its way into print this year. It was, as Parker Palmer described it, nothing less than “a glimpse of the kingdom of God.”

Nevertheless, like so many traumatized first responders, my service came with a tremendous personal toll. The heights of ecstasy I experienced leading this effort were soon to be matched by loss and despair, as I entered my own dark night of the soul, a darkness that would last for the better part of a decade. But in the darkness of anger, depression, bitterness and PTSD, surprisingly I found gold – a golden healing light, if you will: Forgiveness. For the first time I heard with my heart what Nelson Mandela meant when he said, “Not to forgive is like drinking poison and waiting for your enemies to die from it.” For the first time I began to see the power of this transformative force, and discovered that my health and happiness in life depended on it. I had to forgive 9/11, forgive myself for mistakes, forgive the church, forgive institutions, forgive Life.

As my destiny began to unfold before me, I saw that everything that had happened to me, and every mistake I made brought me to a new sense of personal mission and calling: to widen and deepen the sphere of love in the world by teaching and living (on my best days) the incredible power of forgiveness.

While my surprising journey to forgiveness began at the foot of the south tower on 9/11/01, it has continued to the war-torn city of Beirut, Lebanon; to post-genocide Rwanda; to Belfast, Northern Ireland; and to Jerusalem-Israel/Palestine and back. Parts of this journey have been documented in the award-winning film, “The Power of Forgiveness”, directed by Martin Dobblmeier, sponsored by the Fetzer Institute.

On this journey, I have been blessed to meet and learn from some of the great heroes of forgiveness, especially my mentor and friend, Dr. Frederic Luskin (Stanford), one of the brilliant early researchers on the science of forgiveness. His bestselling book, Forgive for Good is a vital and important blueprint for a beautiful life. Fred helps us see that forgiveness is a trainable life skill, and anyone can do it. I’ll have lots more to say about his ground breaking work in blogs ahead.

But what if I told you that I know a wellness strategy that is good for your health on a par with quitting smoking?? I do! Forgiveness. Tune in to my blog as I try to unpack these ideas, and hopefully offer thoughts to make your life, and the world, better.

In closing, I’ll give the parting shot to another forgiveness luminary, Lew Smedes: “Forgiveness is to set a prisoner free and to discover that the prisoner was you.”